Governor Deval Patrick took to the stage to rally the crowd before the music started.

“We have to make a choice and our choice is Elizabeth Warren.  For a better commonwealth and a better future, we are counting on you,” he told the crowd, encouraging them to get out the vote and work hard in these last days.

Then he introduced, “a son of the Commonwealth, James Taylor.”

The music included the classics, “Sweet Baby James,”  “Fire and Rain,” “Copperline,” and Elizabeth’s favorite James Taylor song, “You’ve Got a Friend.”  In introducing that song, Taylor told the crowd, “You’ve got a friend in Elizabeth Warren.”

Taylor spoke about his time on the road campaigning for President Obama and performed “Here Comes the Sun” as a reflection of his joy in 2008 when Obama was elected to bring an end to the Bush-Cheney years.

Elizabeth came on stage at the end of the event, thanked Taylor, and thanked the audience for their hard work for the campaign. The evening came to a close with a standing ovation for both Taylor and Warren after they performed “America the Beautiful” to close out the event. 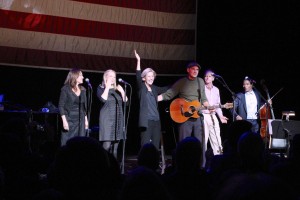