On April 27, 2012, The Boston Herald reported that in the late 1990s Harvard Law School had touted Elizabeth Warren as being a Native American faculty member.

On May 1, 2012, according to a Boston Herald article,[1] the Warren Campaign offered two pieces of evidence [2] it said supported Ms. Warren’s claim of Native American ancestry.

The first piece of evidence was a statement by genealogist Chris Child of the New England Historic Genealogical Society that Warren might be 1/32 Cherokee.  That claim, based on a type of documentation[3] which did not exist at the time in question, later was withdrawn as lacking any evidence.

The second piece of evidence the Warren Campaign offered reporters was an undated article from the Muskogee Phoenix about the contributions of Elizabeth Warren’s first cousin, Mrs. James P. Rowsey, to the Five Civilized Tribes Museum in Muskogee, Oklahoma as proof of Ms. Warren’s Native American ancestry:

The campaign also hastily produced an undated newspaper clip last night from the Muskogee Sunday Phoenix detailing a “Mrs. James P. Rowsey” — who they said is Warren’s cousin — and her involvement with the Five Civilized Tribes Museum, which is dedicated to preserving Native American art.

“Mrs. James P. Rowsey was Elizabeth’s first cousin — shared the grandparents in question,” a campaign official said in the statement.

In the Pow Wow Chow cookbook were recipes allegedly authored by Warren, as reported by Daily Mail[6]: 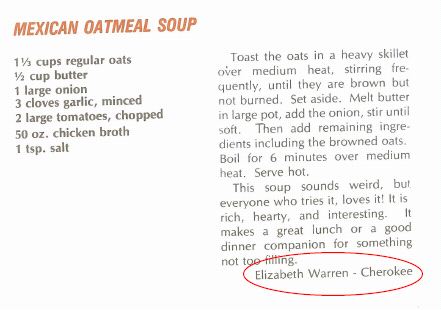 Mrs. Warren’s 1984 recipe for Cold Omelets with Crab Meat contains all four of the ingredients listed in Mr. Franey’s 1979 recipe in the exact same portion but lists five additional ingredients. More significantly, her instructions are virtually a word for word copy of Mr. Franey’s instructions from this 1979 article. Both instructions specify the use of a “seven inch Teflon pan.” …

The third potentially plagiarized recipe, “Herbed Tomatoes,” appears to be copied from this 1959 recipe from Better Homes and Garden.

Other family members[13] of Warren submitted recipes, none of which appeared to be authentically Native American or Cherokee.

Warren’s husdand, Bruce Mann[14], who never has claimed to be Native American, also listed himself as Cherokee and provided a recipe[15] for Oriental Beef Stir-Fry: 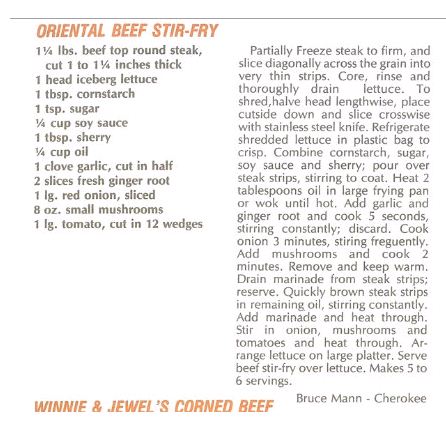 Mann’s recipe previously appeared — word for word — in the Oswego (NY) Palladium Times[16] on January 24, 1983, the year before Pow Wow Chow was published.