In 1987 she began teaching at the University of Pennsylvania Law School, and in 1992 she became a visiting professor at Harvard Law School, a position which became permanent in 1995 when she was named the Leo Gottlieb Professor of Law. 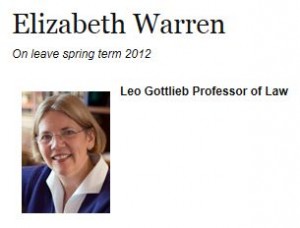 Warren’s Harvard Law School biography, pror to her leaving to joint the Senate, lists her many professional accomplishments and publications.[2]

In 1995 Warren acted as Senior Adviser to the National Bankruptcy Review Commission [3].

In 2010, she was appointed by President Barack Obama to launch the Consumer Financial Protection Bureau, but in 2011 was passed over as his pick to lead the new agency [4].

Economist Cass Sunstein [5] argues that government should “nudge” the populace to evoke approved responses. Building on this idea, Adam Levitin summed up Warren’s style as follows [6]:

Meanwhile, Warren was also out of step with behavioral-­economics disciples like Cass Sunstein, who believe that government works best when it “nudges” people’s decisions rather than mandates them. Warren favors far more traditional command-and-control regulatory approaches. “Elizabeth is fine with a nudge,” says Adam Levitin, a Georgetown law professor and Warren protégé, “but she also knows that sometimes you need a sharp elbow, and she’s not afraid of that.”

In 2012, Elizabeth was the Democrat nominee for U.S. Senate in Massachusetts against incumbent Scott Brown (R-MA) and was elected.