Elizabeth Warren obtained fee waivers from at least 50 federal bankruptcy courts so she would not have to pay for access to the federal PACER system,[1] even in years when she had a high 6-figure income and an 8-figure net worth. Elizabeth Warren obtained federal fee waivers despite high 6-figure income and 8-figure net worth.[2]

In 2010-2011, Warren earned approximately $140,000[5] from Aspen Publishers for her books about bankruptcy.  Warren also has published a variety of commercial books over the years, for which no income data is available, such as the 2004 publication of The Two Income Trap[6] (see Megan McArdle[7] and Todd Zawycki[8] reviews), which incorporated her bankruptcy research and many of her non-commercial articles.

Warren also worked as a private consultant for which she earned $90,000 on bank antitrust litigation, although it’s not known if she incorporated her bankruptcy docket work because she will not release her report.[9]

These commercial endeavors are separate from her non-commercial research, such as the review of bankruptcy case dockets which led to a critique[10] of Warren’s work by Rutgers Law Professor Philip Schuchman. These bankruptcy file reviews also contributed to Warren’s non-commercial studies such as the claim[11] that medical expenses accounted for one-third  of all bankruptcies.

Despite a high income and net worth, Warren took advantage of a policy at PACER which provides for fee waivers for academic research based on her standing as a law professor.

Copies of letters submitted by Warren[12] in 2006 and 2008 in the Middle District of Pennsylvania, along with corresponding Orders (plus a third Order in Maryland for which no letter was found) were located through the PACER system.

In her November 22, 2006, letter to the Court, Warren attached a list of 49 federal district courts which previously had granted her waivers from the normal PACER fees: 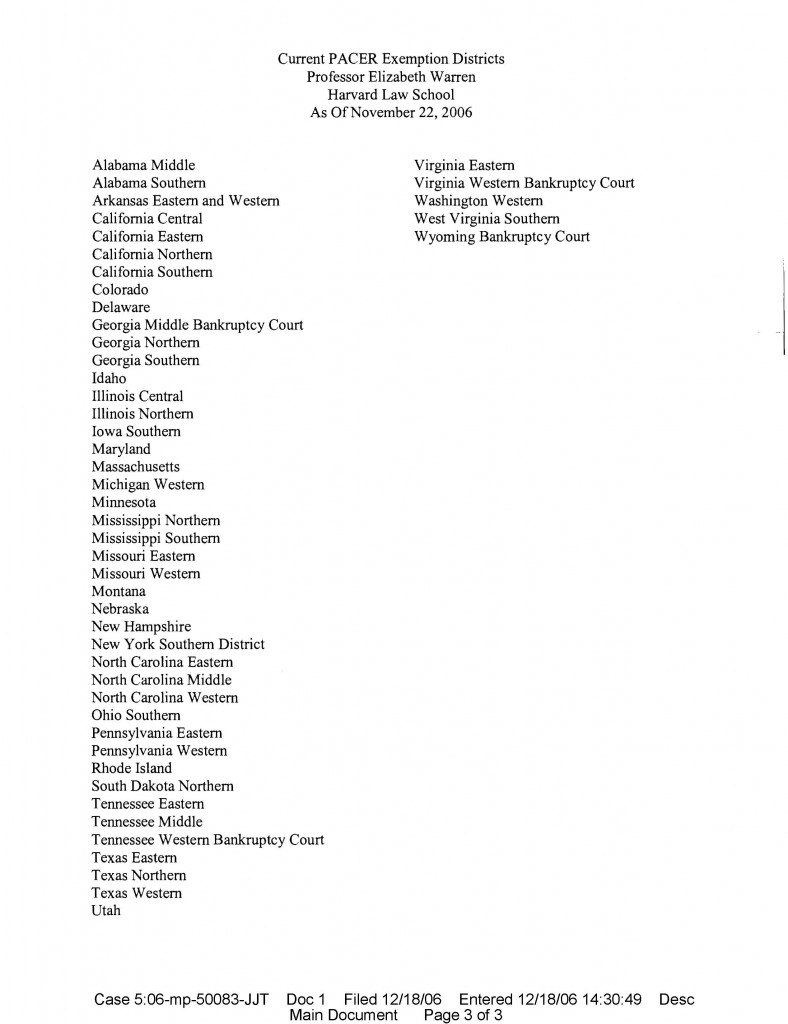 How much did Warren save in fees?

It would depend on her use, and how far back in time the waivers went.  Warren wrote[13] (see fn. 42) that prior to 2002 she obtained a grant from a private foundation to cover some PACER fees, and that as of 2006 there were 50 districts from which she had waivers.

Warren’s history in the Western District of Pennsylvania[14] is available through Google searches, and goes back at least to 2005, and continues with a waiver application submitted in January 2012.

It is easy to surmise that Warren saved thousands of dollars, maybe even more, over the course of her research by not having to pay the PACER fees that all other users had to pay.