In January 2013, a controversy broke out at to the “ethnic cleansing” of Elizabeth Warren’s Wikipedia page.[1]

There was a time when Wikipedia, the source to which so many people refer for basic information, contained a detailed explanation of the controversy under its own subheading, and there was an effort made[2] to document the story.

For example, as of June 16, 2012[3], Warren’s Wikipedia page contained a subheading and detailed explanation (click image to enlarge):

During Warren’s 2012 senatorial campaign, on April 26, 2012 the Boston Herald reported that in 1996, Harvard Law School had “touted” Warren as Native American based on her claim of that ancestry soon after she was hired. The Boston Globe noted other media reports by Harvard in 1997 and 1998; the Crimson in 1998 said, “Harvard Law School currently has only one tenured minority woman, Gottlieb Professor of Law Elizabeth Warren, who is Native American.”[46] The law school was responding to critics at the time who said it had not hired sufficient numbers of women and minorities.

To that point in the campaign, Warren had seldom, if ever, mentioned her ancestry.[47] Three days later, the Herald reported that Warren had identified as a minority from 1986 to 1995 in a directory of law professors. It was often used as a resource by recruiters to make diversity-friendly hires.[48][46][49] The Brown campaign, the Native American Rights Fund,[50][51] and others have questioned her motives and the propriety of her claiming minority status, which was intended under diversity programs to help historically “disadvantaged” populations.[52][53][54][55][56] A Cherokee group, made up of fewer than 175 members,[57] protested her trying to gain advantage under affirmative action programs, and said that only the Cherokee Nation could determine tribal membership.[58]

The Globe noted on May 25 that “both Harvard’s guidelines and federal regulations for the statistics lay out a specific definition of Native American that Warren does not meet.”[46] Harvard’s guideline is twofold; it says that a Native Americans is “a person having origins in any of the original peoples of North America and who maintains cultural identification through tribal affiliation or community recognition.”[46] By the end of May, Warren had not documented her ancestry. She is not a member of a tribe and the “current executive director of Harvard’s Native American program has said she has no memory of Warren participating in any of its activities.”[46]

On April 30, the genealogist Christopher Child at the New England Historic Genealogical Society said he had found that everyone in Warren’s family, through her great-grandparents’ generation, has been listed or classified as white in records. He has noted that documenting Native American ancestry can be difficult.[47][59][60][61] Warren said that she had heard family stories about her Cherokee ancestors her entire life.[62] She said she had identified as a minority in the law directory listing (of the 1980s and 1990s) for chances to to meet people of similar tribal background. (The reporter Hillary Chabot noted the directory does not identify the specific minorities.)[49] Warren said she eventually “stopped checking it off”.[63]

Warren said her family talked of links through her maternal grandparents’ lines to the Cherokee and Delaware peoples in Oklahoma.[55] On April 27, the Warren campaign said she had never authorized HLS to claim her as a minority hire.[47] On May 4, Harvard refused to confirm whether Warren was the one Native American minority claimed in its 2011 diversity report, which notes it is based on self-reporting. No gender was indicated.[49]

On May 12, the Boston Globe reported that, in providing federal diversity data statistics, the Harvard Law School (HLS) had reported employing a Native American woman professor in 1992-93, when Warren was a visiting professor; and for at least six consecutive years beginning 1995-96, after Warren had returned as a tenured professor.[64][65] The diversity census notes: “Race/Ethnicity designations are from self-report data.”[49] The same day, the AP reported that in 1994, the University of Pennsylvania listed Warren as a minority (she was still working there). She had not identified as such earlier in her career, neither when applying to Rutgers Law School nor when teaching at the University of Texas.[66]

On May 25, Alan Ray, the former Harvard Law School administrator responsible for its diversity statistics during the period examined, confirmed that the data came from self-reporting by faculty; he said that Harvard “always accepted whatever identification a faculty member wanted to provide”.[46] (Ray is an enrolled member of the Cherokee nation.[46])

On May 31, Warren acknowledged for the first time that she had told people at Penn and Harvard that she was Cherokee, but denied that “there was [any] reporting for this”.[64] She said she had learned of Harvard’s diversity census after reading about it in the Boston Herald.[64]

In a campaign appearance in early June, Warren repeated that she had not received any preferential treatment due to her claimed minority status. “I never received any benefit from it. Every single person who has been involved in hiring me has issued a statement to that effect.”[67] In campaign appearances in early June 2012 posted on YouTube, Elizabeth Warren said that, if elected by Massachusetts voters, “I would be their first Senator, so far as I know, who has Native American heritage.” [68][69]

Yet someone has been objecting to such a detailed explanation.  Those efforts resulted in a truncated version of the subsection by early September[4], after which point — on or about September 13 — the subsection was removed and the explanation buried in a few sentences in the 2012 Election section.

The history of the page[5] reveals that there was an ongoing attempt to cleanse the page of substantial information[6] about the Cherokee controversy: 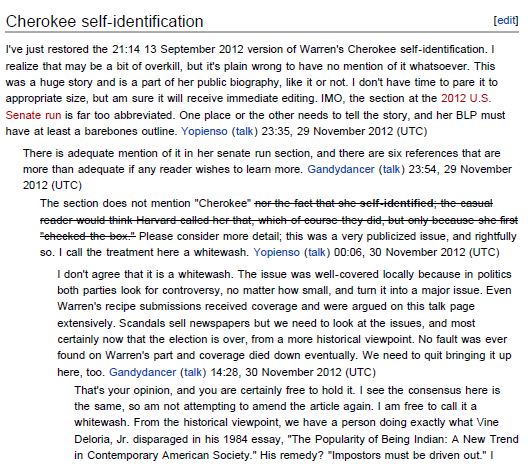 As of January 7, 2013, there no longer was a Cherokee Controversy subsection, and the entire discussion of Elizabeth Warren’s claim to be Cherokee were three sentences:

In April 2012, the Boston Herald reported that in the 1990s, Harvard Law School had, in response to criticisms about the lack of faculty diversity, publicized Warren’s law directory entries from 1986 to 1995, which listed her as having Native American ancestry.[47][48][49] Warren said she identified herself as a minority in the law directory listing (of the 1980s and 1990s) in hopes of being invited to events to meet people of similar background.[50][51] Harvard Law professor Charles Fried, who had served as Solicitor General in the Reagan administration [52] and had sat on the appointing committee that recommended Warren for hire in 1995, said that her heritage was never mentioned and played no role in the appointments process.[47]

An expert on Wikipedia called this editing a violation of Wikipedia’s rules.[7]

Subsequently, there was a partial restoration of the page.[8]

But an “editing war” then broke out in which the section was removed again, and negative information removed.[9]

As of January 14, 2013, the entry at Wikipedia for Warren was inaccurate and incomplete.[10]